Today would have been my mother’s birthday. She was born in 1900, the same year as my father. It was the beginning of a fresh new century. She was born in the building below after a seven months pregnancy. It is probably the reason why it was a home birth. On the other hand, home birthing was quite common in those days.

She was always a rather physically weak child, did not like any strenuous activity. On Sundays her father liked to walk with the family across the Tempelhofer Field (later Airport Tempelhof) where the walk over the sandy ground drove her to tears.  But her father wanted to have his beer on the other side of the large field. 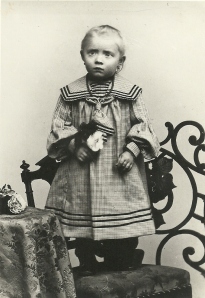 I’m not sure what she is thinking here. Is she looking at her dad and thinking , will he abandon me here? After school and training to be an “early childhood carer” she worked for a little while as a nanny, but later, during the Big War, she joined the Post Office and became a telephone operator in the new technology of telephony. She had a beautiful, clear voice right to the end of her life.  In old age she still sounded like a forty year old on the phone.

This is how she looked as an eighteen year old:

Sitting on a typical bench in Viktoria Park, Berlin

At this time she lived with her mum and dad in an apartment in this street. 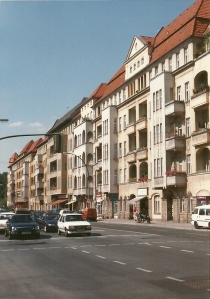 She lived in four different apartments  from 1913 to 1955. We were living here during the war, but were lucky enough not to experience any heavy damage.

In the next two pictures you see me with my mother at various stage of my life.

Together again this time as a five year old, 1940

The next picture became very important to me in 1944 when I was evacuated for a whole year. I carried this very picture on me all day and looked at it a few times a day. I was always afraid I would lose all memory of her.

Of all my children she saw Gaby as an infant before we migrated to Australia. Our son Martin she got to see in 1980, but I have no photo of it. Caroline was in Berlin in 1980 as an infant and later, in 1986 and you can see them both  and me.

In the next two picture you see her as I remember her in my mind for the rest of my life. In the first photo you see her with one of her granddaughters in Berlin, Marianne. Both pictures where taken on Mother’s Day 1980. 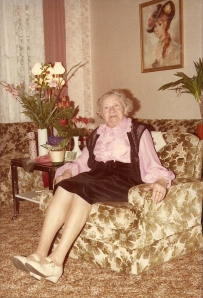 She passed away, suddenly,  on the 7 January 1988. I talked to her on New Year’s Day and her voice was as clear as ever.

Here is my birthday present to her. A flash mop in Leipzig singing the “Ode to Joy”.