In October, I wrote a blog  about our dear, late friend Ron Bates. He played a  pivotal role at that stage in our life and helped us overcome a family tragedy.

Towards the end of nineteen hundred and seventy-seven, we were looking forward to the arrival of a new member to our family. But fate had other ideas, and my wife Uta lost the baby.

Sure, it was a time of grief and disappointment but we promised ourselves to try again. Just then, Ron came up with the idea of a short vacation with some of his friends up at Numbacca Heads on the Mid-Northcoast of NSW. “That would do you the world of good,” he said.

We went up by train and on arrival were met by Ron at the station. He took us to the home of his friends, Snowy and Eve. What a lovely couple they were. They took good care of us despite not having met us before. The next few days they took us, and Ron, to show us the exceptionally wooded hinterland.

There  is a beautiful spot from where you could  view the mouth of the Numbacca River and  the landscape beyond.

We had a picnic at a nature reserve with a stand of beautiful  tall Sydney Blue Gums. 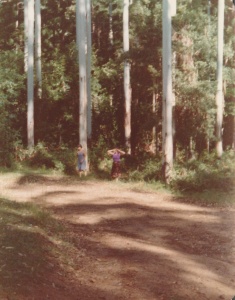 Uta and Eve among the trees

Next day we really ‘went bush’, as they say in Australia.  We drove to  the village of  Tailors Arm.  To call this settlement  a village,  is probably a bit over the top. It is a location that has a pub. This pub became famous in the gestation of the  song, “The pub with no beer”.

Uta, Snowy and Ron posing on the veranda.

I can tell you, we enjoyed a beautiful, refreshing beer on that day. Should we have charged the pub with false advertising?

On the next day,  Ron wanted us to meet another friend of his, Mary Boulton. She was a local identity and  had established a Pioneer Cottage at Macksville.

The Pioneer Cottage in 1978. You find other pictures on the website.

Mary Boulton, Snowy and I masquerading as an explorer

Ron and I at the gate to the Pioneer Cottage

We had a great time on that short vacation. It was also memorable because only days before I took up running and ran along the  roads at Nambucca Heads. I wanted to lose weight as I was weighing 88 kg at the time. I’m still running now about three times a week.

Nine months later we had a baby girl. Our daughter, Caroline, just had her birthday a few days ago.

Caroline and her partner Matthew. What a great couple they are.

That year, 1978, had a sad beginning, but it ended well.  Life was kind to us and with the help of  friends and family we found our way back into a full life. Actually, we still live in the afterglow of that year.

Everything that is happening now is the result of what has happened in the past. Be mindful of what you are doing today.